There’s an image on Rachel Comey’s Instagram page that encapsulates how she has garnered critical plaudits but also her attitude to the fashion world. The picture focuses on mature model, Birgitt Doss’s midriff. She’s wearing a bralette top and her stomach distinctly protrudes between the bottom of the top and the waist of her trousers – like it does for the vast majority of people who waved goodbye to their twenties around the time of George W Bush’s inauguration as President.

‘Womanly realness… thank you Ms. Comey,’ says one below-the-line comment. ‘Literally crying from the beauty,’ writes another. Comey is a fashion designer who likes to do things a little differently. Harper’s Bazaar once, rather charmingly, described her as ‘the cool babysitter you never stopped worshipping. She’s the style equivalent of the visiting art professor you made a playlist for.’

Appropriately enough, she studied art at the University of Vermont, graduating in 1994. Comey started her first business in Burlington with a line of women’s underwear, before moving to New York in 1997. Subsequently, she spent several years working as a freelance assistant on photoshoots, designing stage outfits (David Bowie was an early admirer) and had a stint working at the fashion brand, Theory, launching her own label in 2001, with a menswear collection. ‘I had a lot of male friends that were performers and musicians and skulking around Manhattan, and they needed stuff for the stage,’ she told GQ. However, it is in womenswear that she has made her name, picking up an eclectic group of celebrity fans enroute, including Dakota Johnson, Maggie Gyllenhaal, Rashida Jones, and even Michelle Obama.

‘I had a lot of male friends that were performers and musicians and skulking around Manhattan, and they needed stuff for the stage’

Arguably, the first sign that she was determined to tread her own path came in 2013, when she staged a runway show and dinner on the Brooklyn waterfront, which was unheard of at the time but has been aped since.

She launched her first store in New York’s SoHo a year later. The designer had her eye on the one-story former garage for years. She told W magazine as she was opening the doors: ‘I was actually a customer of the rug store that was in its place. It was an easy choice to open here, I just had to convince the landlord to pick me.’ The space was created by a combination of Brooklyn-based architect, Elizabeth Roberts, and interior designer Charles de Lisle and is notable for its retained and refinished beamed, wooden ceiling, a terrazzo floor made with poured concrete mixed with hand-placed marble chips, and a large block under one of the skylights – made from concrete and stones collected from a local beach combined with pumice stones from the designer's denim stone washing facility – that’s used to display shoes. Comey’s collection, meanwhile, is hung on bent, brushed brass clothing racks on the walls. According to de Lisle: ‘Rachel wanted a strong space to hold feminine clothes and she also wanted to room to show the whole collection for the first time… The goal was to put the pieces in this envelop, this was engaging.’

‘Rachel wanted a strong space to hold feminine clothes and she also wanted to room to show the whole collection for the first time… The goal was to put the pieces in this envelop, this was engaging.’

As the business has changed, adding more accessories, the store has adapted. Recently, de Lisle specified USM Haller storage and retail display cabinets in the center of the space that contain a combination of clothes, books and the designer’s increasingly ubiquitous clogs, as well as other accessories. ‘I’ve been a fan of USM for a really long time and I’ve been using it for a really long time,’ he explains. ‘To me it’s super-sophisticated. It’s something that’s industrial but really beautifully designed that can work in any circumstance.’

The ensemble works a treat, being elegant, functional and a little bit surprising – much like Comey’s clothes. As de Lisle points out Comey is a designer ‘going down her own road. That’s her magic, she’s following her true spirit’. 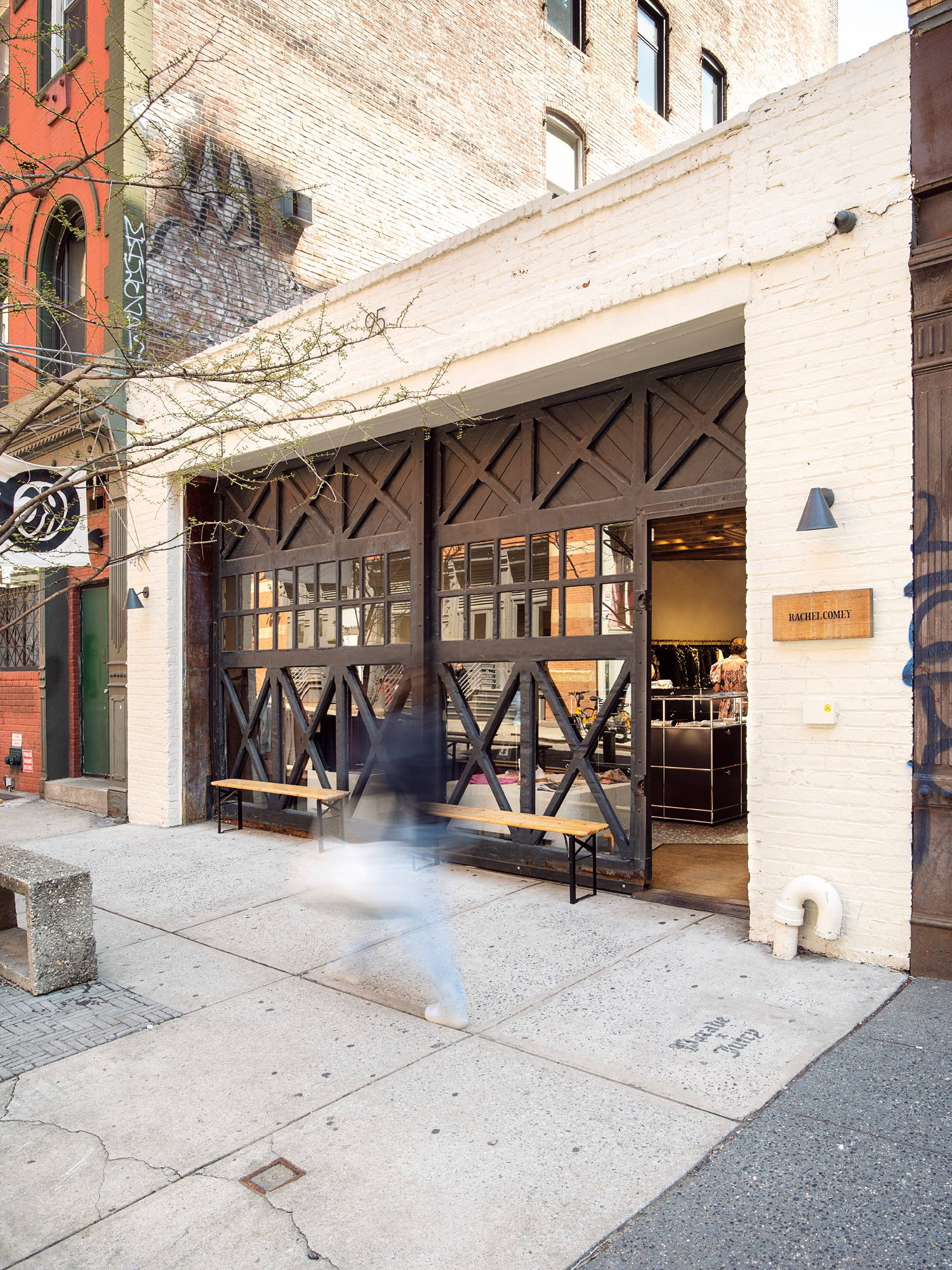