Get personalized ideas and advice from a USM Design specialist, in person or virtually. FREE DESIGN SERVICES >
Custom furniture designs deliver in 16-18 weeks once your order is placed. DESIGN NOW >
3D Interactive Configurator

After meticulously restoring a large mid-century house designed by architect Sir Miles Warren in a leafy Christchurch suburb of the South Island of New Zealand, interior designer Kristina Pickford and her husband Michael decided to move. Their choice of home is the antithesis of the former residence, instead of a house, it’s an apartment, instead of the south island, they’ve opted for the north, and in place of land comes an inner city plot with no outside space.

The surprising move takes them to a beautiful apartment in the historic Dilworth building in the heart of downtown Auckland, just minutes from the waterfront. Taking the same care and attention to detail as with the Christchurch mid-century house, Kristina has renovated the couple’s apartment with a lightness of touch, giving the interior an immediate classic and timeless feel. With a background in interior design and heritage conservation it was important to Kristina that the building‘s heritage and character be respected. In this case, for Kristina, this meant stripping the building back to its original bones and starting from scratch. She has had experience in this area having been involved in working to preserve heritage buildings after the devastating earthquake in Christchurch on New Zealand’s South island in 2011. For the apartment in Auckland, she was keen to take the same approach. Not one to sit back and idly enjoy the pleasures of her own making and design, Kristina is in the midst of a new project, building a beach home on the Coromandel Peninsula, approximately 150km east of Auckland. It’s an area rich in native temperate and regenerating forests and vast coastal areas. Her interior design business is also about to be relaunched so we caught up with her in Auckland to establish what good design means to her and how her work stays relevant in an ever-shifting interior design world.

Tell us about relocating from a large mid-century home to an inner city apartment - it must have been quite a contrast?

A huge contrast! But it’s interesting how we can live quite happily in a smaller space and have everything we need. It was a big part of the move, actually, choosing to live in an apartment and wanting to test the idealistic notion of living with less.

I’m a country girl and I’ve always had lots of land and space and accumulated stuff. So I think this downsizing has been good for me—for both of us, actually. You don’t need much to be perfectly happy. You don’t need all those bedrooms! I do really miss the garden though.

Do you have any outside space?

No, you can’t get outside. If someone told me that we had to stay here forever, I might move on pretty rapidly. The Coromandel is the bit that makes it work [Kristina and her husband are building a beach house there]. I think I need land under my feet and land to work in.

Do you think this is a particularly New Zealand trait because we have had a pretty ambivalent relationship to apartment living?

Yes, well we’re only just starting to consider apartment dwelling here. Historically few have chosen to live in apartments in New Zealand. The quarter acre section is what we’ve been brought up with!

Do you think this attitude is changing?

Yes, I think so but we need to be really careful that we develop our cities in a way that encourages people to live in apartments. Auckland still has a long way to go. It preferences cars above pedestrians and there are not many public spaces. It’s fantastic having the harbour and the islands so close though.

“USM has a softness. It’s something about the powder coated steel with the chrome, which manages not to look harsh. There’s just the right amount of detailing.”

Can you tell us about your background in design?

I studied landscape architecture which then morphed into interior design. I had my own business for seven years designing interiors in Christchurch. I returned to university to study architectural history and art history and also dabbled in sculpture. Actually, I always wanted to practice architecture when I was younger. My mother told me I didn’t have the aptitude because I didn’t use my father’s drawing board!

Is your father an architect?

No, he’s an engineer. I’m a ‘wanna be’ architect!. That’s probably where the interior design came in and the architectural history, the desire to create. I actually love having a project. I love the process of starting and seeing through a completed project. The architecture and art history led to heritage. I worked for Heritage New Zealand Pouhere Taonga and the council as a heritage advisor for six years. It took me to Finland and to other places where I met some amazing people and got to visit some of the best examples of Modernist architecture in the world. And then CoCA...

Tell us about CoCA, the Centre of Contemporary Art, in Christchurch

I was Chair of that project for four years. It was a great project to see through. Finally getting that gallery open again—it was completely worthwhile. Mostly it involved overseeing the restoration and upgrade of the Brutalist gallery. It was one of the few modernist buildings that were saved after the 2011 earthquake.

And now you’ve come full circle back to interior design. Can you tell us about your plans?

I feel as though I am returning to interior design with a renewed energy and new clarity about what constitutes good design. For me, good design requires a sensitivity to context, strong spatial awareness and in most cases a light touch. I get personally excited by an approach to design which is ethical and has regard to the environment by the thoughtful use of materials.

Could you tell us a little about how you choose the furniture and objects for your apartment?

Many of the pieces of furniture we have bought are vintage: the Carlo Scarpa coffee table, the faux French bamboo armoire. Other items we have purchased new: the Saarinen dining table and the Flexform couch. I select things that I think we will love and enjoy for the rest of our lifetimes, things that will endure and stand the test of time. I like to mix styles and eras and levels of formality within a space, but I like to do it in a very subtle and soft way. I love to play with surface texture and how that interacts with different qualities of light.

“I definitely like the idea that USM products should last several generations. We should be designing everything like that — with the future in mind.”

Tell us about how you incorporated USM furniture into your apartment.

It started with the bedroom piece. Actually, very early on I knew that I wanted something that matched on both sides and was reflected in both the bedroom and the living space. I was actually going to get something custom made. But I’ve always loved USM.

The local stockist from ECC, Erika Rodriguez was really, really helpful. There’s an online configurator, which we worked through together. I do think you need someone who’s familiar with the product to really get the most out of it. She was able to show examples. The modular sizing give you a range of great scope.

USM has a softness. It’s something about the powder coated steel with the chrome which manages not to look harsh. There’s just the right amount of detailing.

I also really like the fact that it will endure and stand the test of time. I definitely like the idea that USM products should last several generations. We should be designing everything like that—with the future in mind.

I really like the asymmetry of this piece [pointing to the book shelves] with that little quirky drawer in there. The fact that it’s possible to customize the pieces lifts it out of the ordinary. It’s playful but at the same time restrained and understated.

You have some beautiful Aalto pieces. Could you tell us about these?

We have an Aalto stool. It is an original 1950s piece that I bought when I was in Helsinki in 2011 for the Alvar Aalto Symposium. The chair is from the fan leg series (the three leg version is quite rare) and it dates from 1954. It still has its original leather upholstery.

I have also recently bought an Aalto coat rack from a Finnish online site. I got it from a lovely Finnish police officer. It is apparently from the Paimio Sanatorium, which Aalto designed in 1928. It‘s lovely to have it because I visited the Sanatorium on the Aalto study tour—although I can‘t help but think it should be in the Sanatorium and not in an apartment in New Zealand!

The Davide Groppi lamp fits so well with the white USM cabinets.

Yes, I fell in love with the simple and ethereal quality of his lighting. It’s appropriately named ‘Less For Less’ and comes with a standard base and a smaller magnetic base. The magnetic base is perfect to attach to the USM steel.

And do you think USM suits the New Zealand lifestyle?

Absolutely. You can take the modular pieces to different environments and they’ll work perfectly. There’s a flexibility that I really like. It can look quite relaxed but also sophisticated depending on the space. I’d happily use USM at the beach house.

You can change re-configure it to work in a new space. It’s fantastic. It really does have a timeless feel and mixes really well with contemporary and mid-century styles.

I recognize quite a few New Zealand artworks on your walls…

Actually, all of our collection is contemporary New Zealand artists. We have many Canterbury artists works because that’s where we lived for so long.

And Michael Parekowhai’s bowler hatted man. Was the piece brought specifically for the apartment?

Yes, I really liked the idea that here we are in the CBD and he’s like Rene Magritte’s man. He’s a sort of ’50s career bureaucrat—on one hand looking straight out at the city and on the other hand looking blankly at the wall. I like the idea that he’s looking out to the city but also to his ‘house’ [referring to Michael Parekowhai’s ‘Lighthouse’ outside the apartment at the end of the pier]. 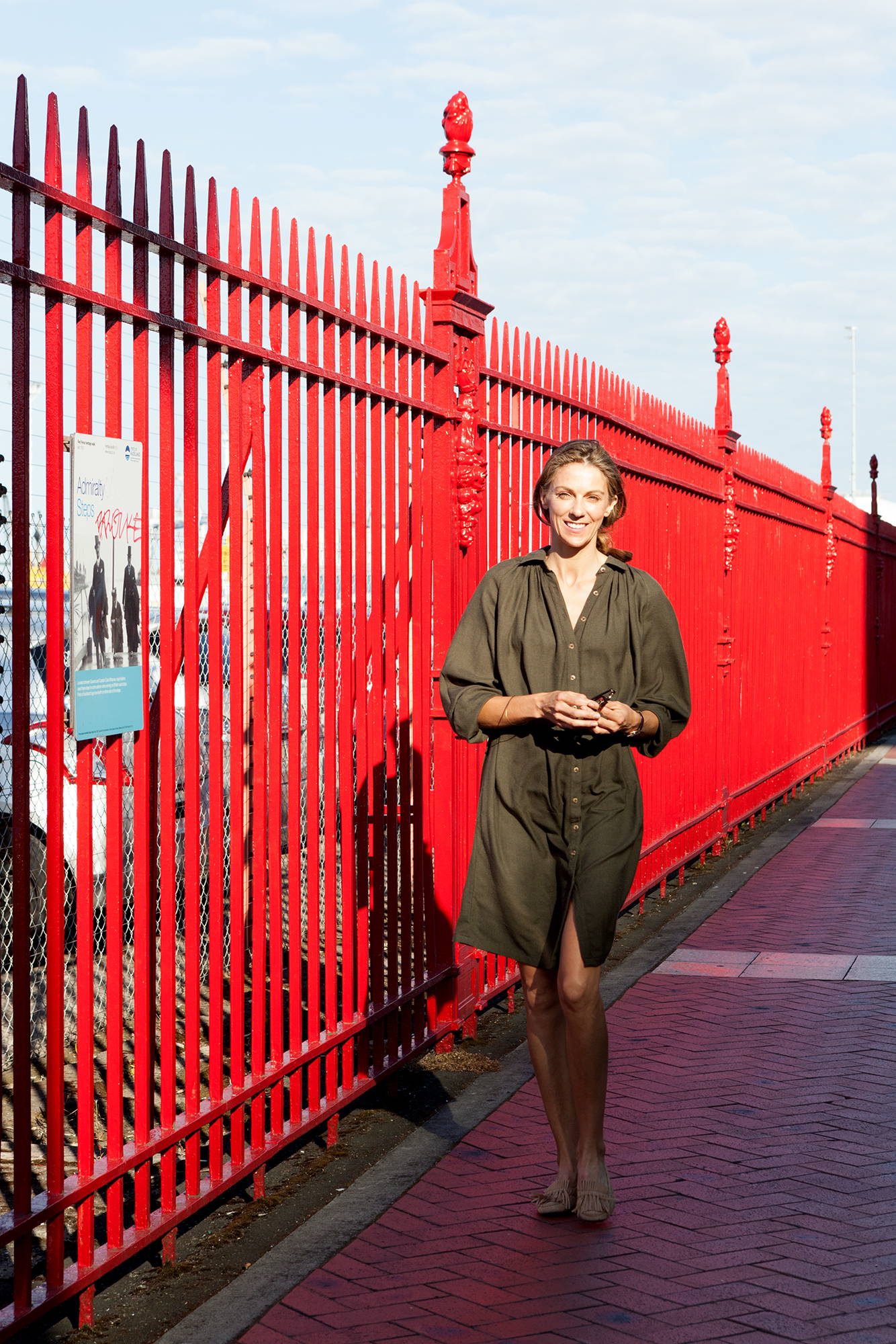 Thank you, Kristina for showing us your apartment and your favorite harbour. This portrait was produced by the international interview magazine Freunde von Freunden. Find more USM furniture for your home and workspace here.