A combination of place and profession have dominated the lives of Kerstin and Andrew Fischer. The pair originally met while studying architecture at UC Berkeley before going their separate ways. Ten years later they re-connected at a local coffee shop and married in 2006.

Which coincided with Andrew creating his practice in The City, doing a combination of new builds and refurbishment work. Kerstin, who had been working in San Francisco, joined a couple of years later. ‘She came on board just in time for the banking crisis,’ laughs Andrew. ‘But we survived that and what doesn’t kill you makes you stronger.

It seems they both bring different qualities to their practice Fischer Architecture ‘It sounds kind of corny but it’s sort of an organic process,’ explains Kerstin. ‘I think Andrew is a phenomenal designer. He’s really talented at the big picture. My strong suit is in details. It’s easy for me to come in and look at some of the big strokes Andrew has done and say if they’re working.’

Their relationship with USM began when they moved into a contemporary home that Andrew helped design in the industrial area of West Berkeley, California. ‘As we were furnishing it there were some obvious pieces, key items, we wanted and our low USM Haller credenza (above) was one of those,’ says Andrew. However, starting a family required a radical change to their living environment and the pair decided to purchase what he describes as ‘this broken, old craftsman house in the Berkeley Hills that just needed a lot of work’.

Their new home was built in 1907 for a single family but then spent more than 30 years as a rooming house. ‘It wasn’t chopped up into separate apartments, people rented bedrooms and shared facilities like the kitchen,’ explains Kerstin. All of which meant that, while some of the individual rooms had their own style superficially, very little had been done to the house structurally. ‘It was intact. Nobody had done it up already. It’s kind of an architects’ dream,’ she confirms.

In the decade since they moved in the pair have done plenty of maintenance – after all some of the shingles are over 100 years old – and merged two rooms on the ground floor to create a contemporary kitchen. Meanwhile, finishes on the timber floors and walls has been stripped back, and the garden has been completely redesigned. That said, Andrew is keen to point out that the house ‘isn’t precious. You can bang into things and not worry about it’.

They bought their original piece of USM with them and have added a second, taller unit. ‘USM is just timeless to us,’ says Kerstin. ‘It’s such a strong style but it also has an absence of style. I really think it can go anywhere.’ (And to prove the point, they have also specified four pieces in their architecture offices.)

‘USM is just timeless to us. It’s such a strong style but it also has an absence of style. I really think it can go anywhere.’

The L-shaped, asymmetrical USM Haller glass cabinet (below) has been designed to display an Art Deco tea set that Andrew inherited from his artist mother, as well as Kerstin’s treasured wine glasses from Finland. ‘With that particular tea set, if you have it you can’t just put it into a cupboard. You’ve got to show it,’ says Kerstin, before adding. ‘It’s not all about the display, it’s mostly about the function of the piece. It’s about storage. Too much visual clutter doesn’t bring me peace.’

There’s also a sense that the architects enjoy playing different eras and materials off against one another – the turn of the century timber interior doing an elaborate dance with the Art Deco ceramics and the engineered modernism of the steel-framed cabinets, originally developed in 1960s. ‘Our house is dented, broken and crooked. 'USM is almost like a pool of water,’ concludes Andrew. ‘It’s this calming, level datum point that takes the intensity out of living in a ruin. It’s a delight just to open a door or a drawer.’

‘USM is almost like a pool of water. It’s this calming, level datum point that takes the intensity out of living in a ruin. It’s a delight just to open a door or a drawer.’ 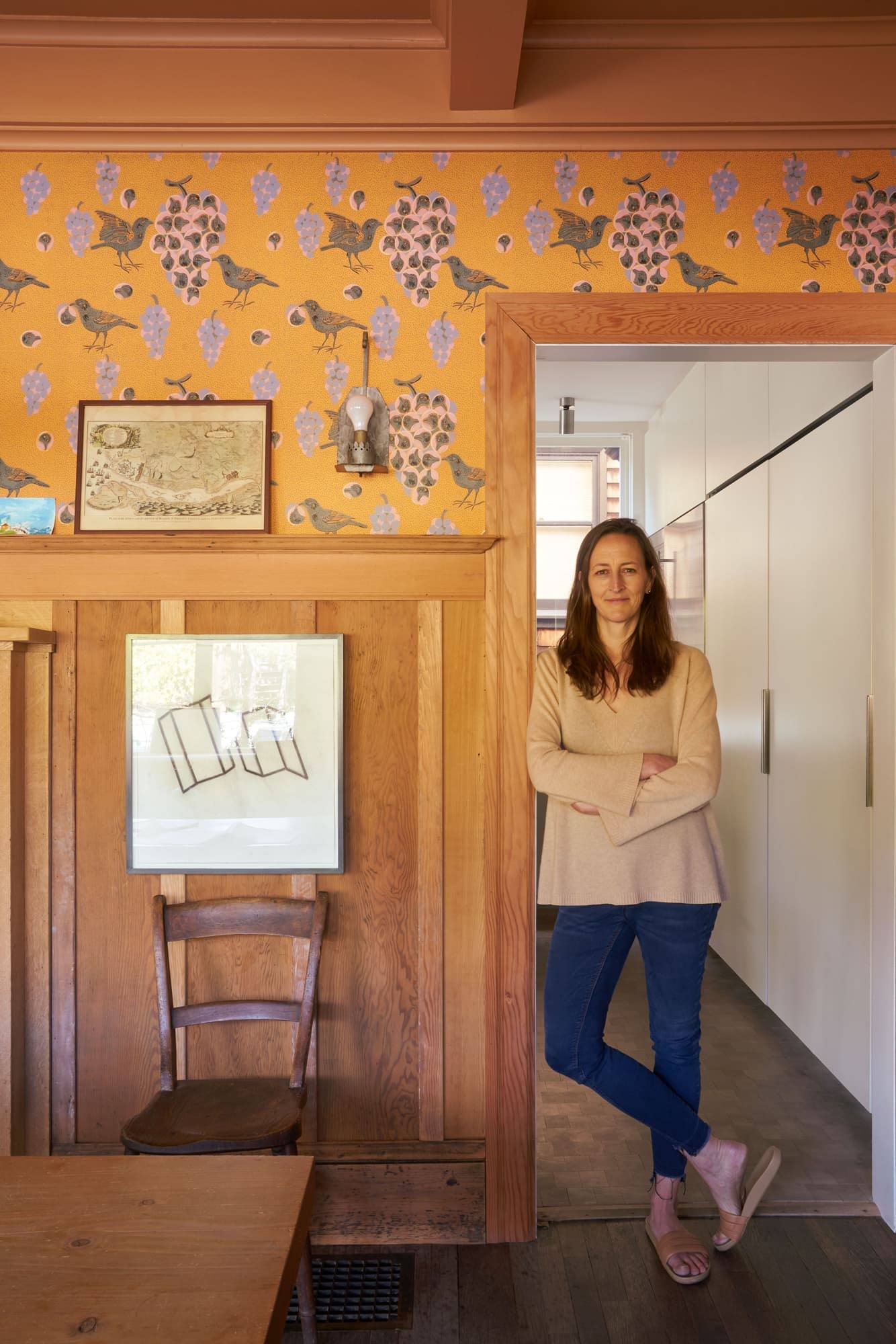